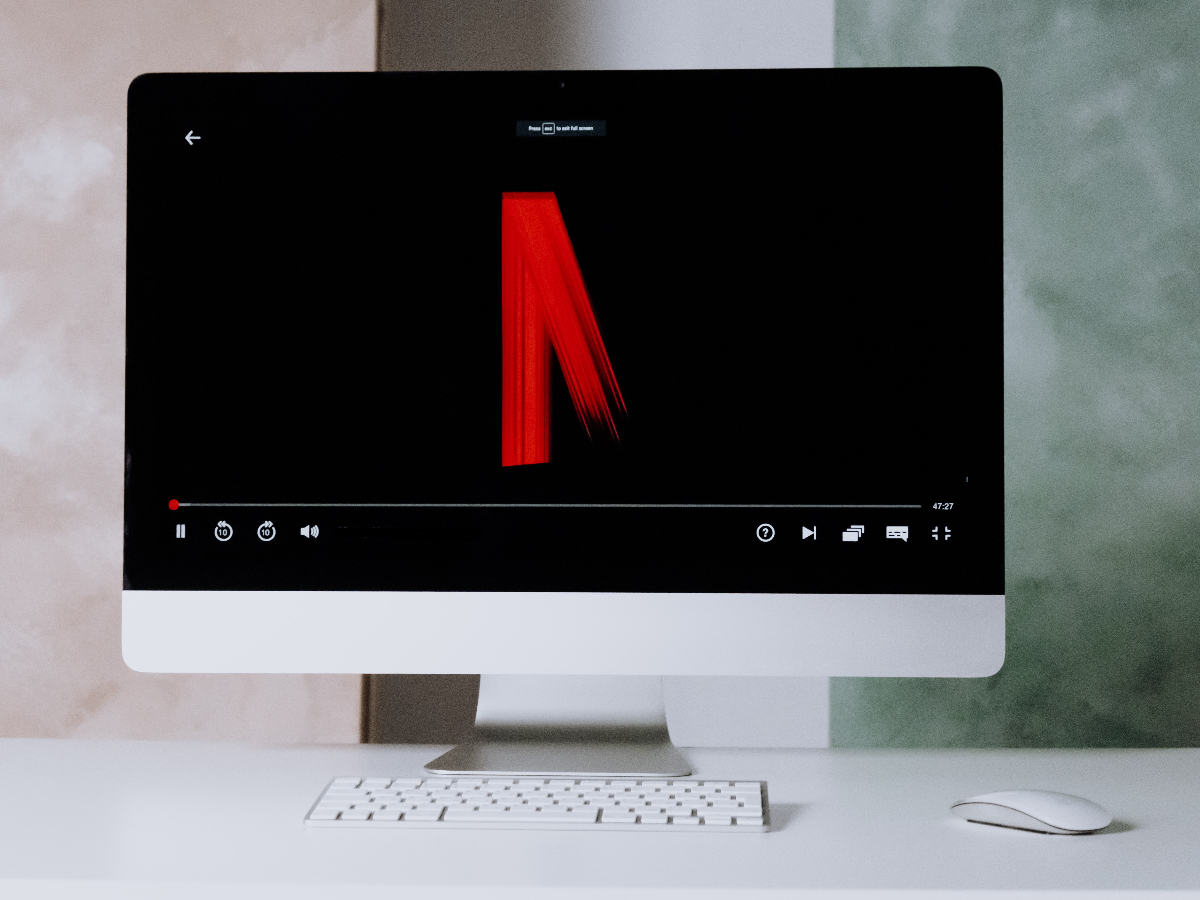 When Learning English, Avoid These Shows on Netflix

What shouldn’t I watch to improve my English?

As language learners we often ask: what should I watch to improve?

New articles appear every day telling you what you have to watch to learn English. A quick Google search for that same topic reveals about 618 million results. That’s a lot more articles than there are shows to watch…

We have also added our own guide: what to watch on Netflix to learn English, which explores sitcoms, reality TV, cooking shows and more.

Even with all these lists, maybe you’re still scratching your head, wondering what to watch. How can you navigate through all the noise?

A better question to ask is: what shouldn’t I watch to learn English?

Netflix and other services offer a wide variety. That also means there are some shows that just aren’t a good fit for English learners.

The programs on this list may be entertaining for some native speakers. But these shows also contain language and situations that some people in the US find sensitive or offensive. For that reason, if you’re learning a language it is best to avoid these shows and stick to more mainstream (or popular) options.

The sitcom is popular culture 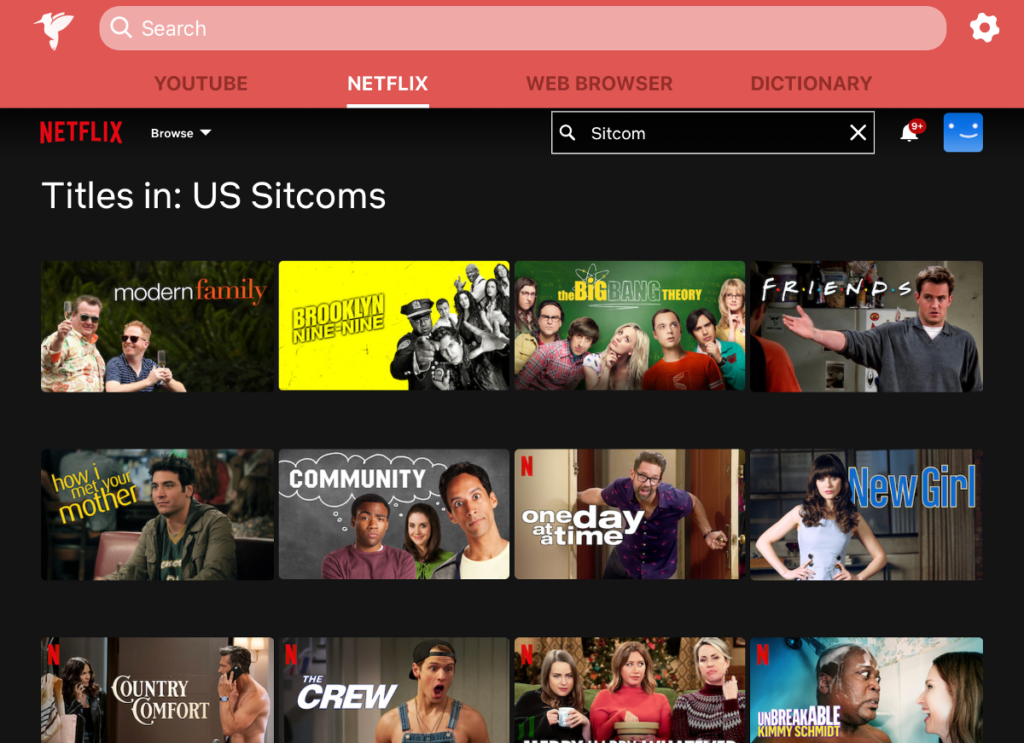 Credit: Sitcoms available on Netflix in the Woodpecker Learning App for iPad

Every sitcom’s goal is to become popular.

Sitcoms want to reach as wide an audience as possible. The creators want to make hundreds of episodes for that audience. And they want to be played on TV for years and years after the show ends. The American sitcom has to be made to be enjoyed by everyone. For that reason, they are “pop culture” (or popular culture).

As we learn English we also learn what to say and how to say it through the characters in a show. Sitcoms are popular culture, so anything we learn from them will be a good fit for talking to most people in English.

That’s why we love sitcoms for learning English.

The opposite of mainstream is “counter culture”

The shows on this list, while entertaining for native speakers, also contain topics and language that may offend some people. They run against or “counter” popular culture. These shows touch on sensitive topics that sitcoms often avoid completely.

When learning a language be careful about repeating the jokes, expressions, and humor you hear in shows that are a bit counter culture. We recommend you stick to more mainstream programs. That is, at least until you become a lot more familiar with English and the culture in your target country.

Here are a couple to be cautious of: 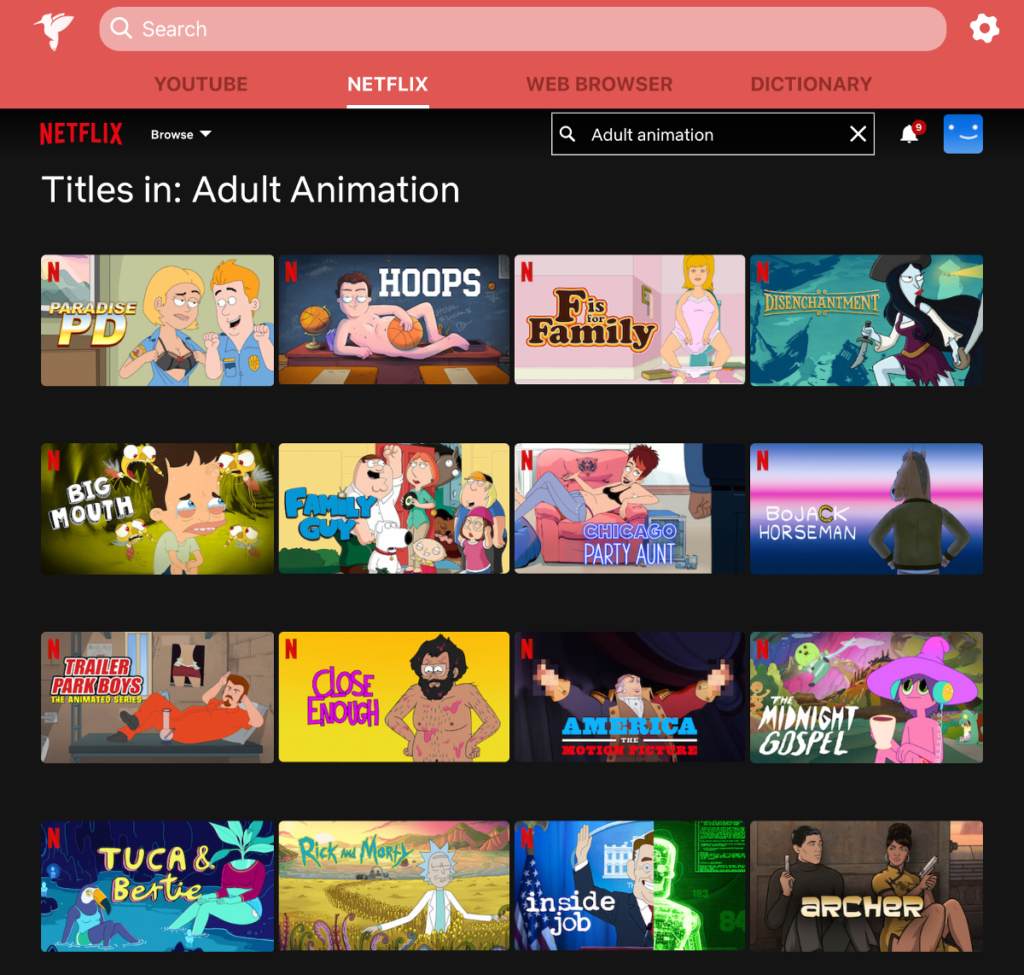 Credit: Adult Animation available on Netflix in the Woodpecker Learning app for iPad

These are cartoons that often make fun of American culture through ridiculous (extreme and extremely silly) characters, behavior, and situations.

Why do we say don’t watch it?

These shows do offer positives for English learning. They have varied accents (with voice actors making funny accents for different characters). And they have common & modern expressions.

However, they often rely on humor from pop culture references (making fun of people or events in real life) that can overwhelm language learners. These shows also use language and touch on culturally sensitive topics that, if repeated, could get you into trouble. 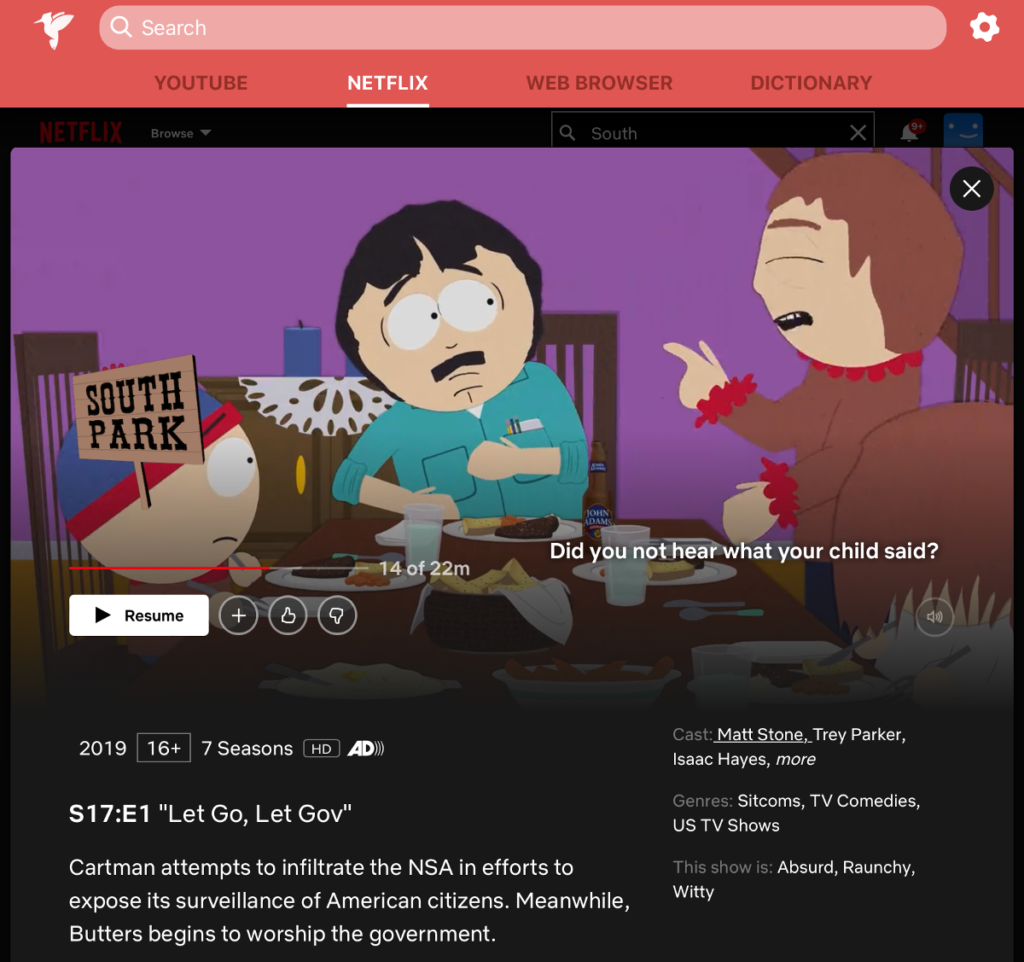 Credit: South Park on Netflix in the Woodpecker Learning app for iPad

Many people find the show very funny. It’s been popular for more than 20 years, now with over 24 seasons and 287 episodes. South Park typically pokes fun at religions, race relations, current events, outspoken people in society, and just about any other topic that is culturally sensitive. The show is told from the perspective of elementary school students. Their parents are often portrayed as inept or moronic (not knowing anything) or worse.

South Park is often in the news for taking things “too far”, meaning their humor has gone too extreme and become offensive. For that reason, learning English with this series could be problematic. If you pick up expressions and other jokes from the show, you might find you get some looks. The comments and jokes will cause most friendly conversations to end and could have you reported in a professional setting.

You’ll see South Park, Bojack Horseman, Family Guy, Archer, and many others. Some of these shows were made for Netflix, some came from television. Watching these shows offers loads of humor and pop culture references, and, of course, English at super fast speeds in a range of accents. This is great for your English.

However, if you’re picking up on expressions and things the characters say, you may find that you offend people when saying them in everyday life. This is why we recommend a little caution when watching these shows.

With more than 700 episodes and on TV for over three decades, it’s hard to add The Simpsons to this list. While it originated as a counterculture (non-mainstream) show when it first appeared, it has grown to have a very wide following.

The Simpsons is similar to the above shows – they are animated comedy series which poke fun at parts of American culture. However, as others have written, there is often a lot more emotion to The Simpsons than South Park, so it is slightly more like a mainstream sitcom.

Does that make it a better show to watch? Not necessarily, still proceed with caution.

When should you watch Adult Animation?

The Simpsons and other Adult Animation shows can be a great fit if you’re living in the US. When your English is improving and you’re looking to explore more about the culture and counterculture (the things that go against mainstream culture). You’ll gain new perspectives and be able to laugh at what’s happening in the country. When preparing to move to the US or another English speaking country, it just isn’t the best fit. 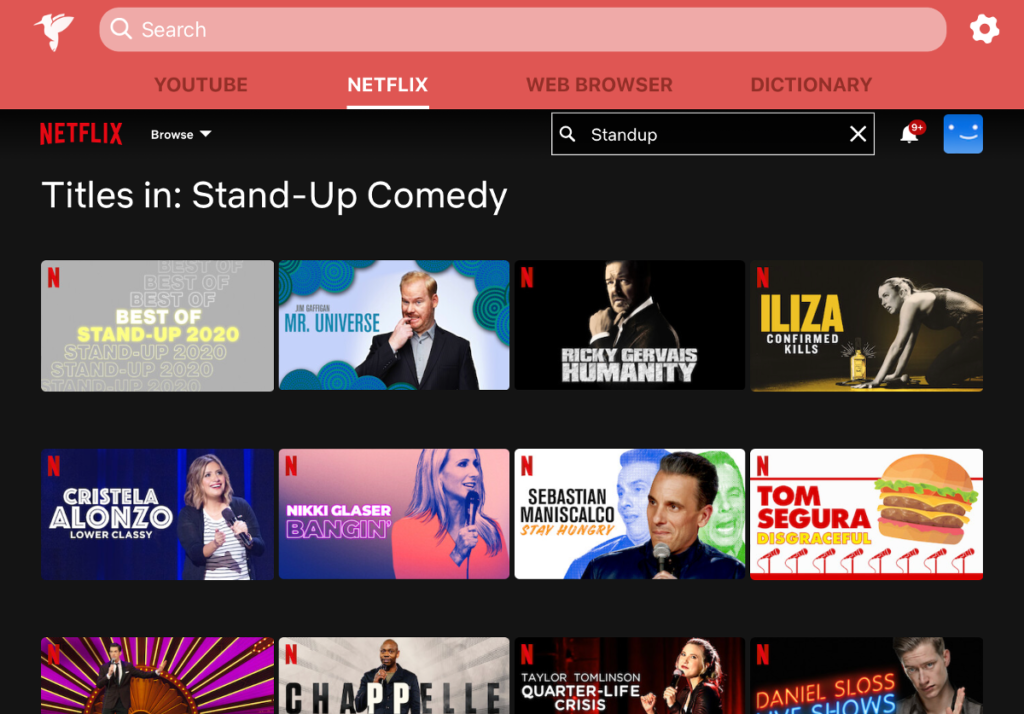 Credit: Stand-up on Netflix in the Woodpecker Learning app for iPad

Netflix has created loads of stand up specials. We even have a topic in Woodpecker showing many comedy shorts and stand-up bits. “Stand-up” has a single comedian on stage for a few minutes to over an hour doing their comedy routine (telling jokes or discussing topics in a way that makes an audience laugh).

These are often hilarious for the audience and native speakers watching at home. These shows can be a great way to practice your listening comprehension. However, they shouldn’t be the only thing you use to learn. Like Adult Animation, it’s not the best content for language learners. 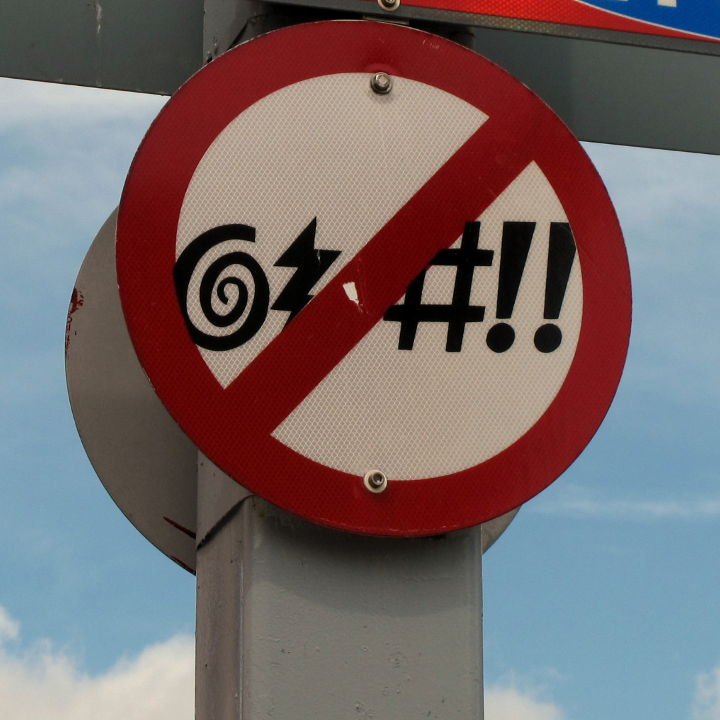 Just about everyone looks up and learns swear words when learning a language. Even though some native speakers will swear often, it isn’t necessarily acceptable in everyday workplace or education settings. On the stand-up stage, things are different. The comedian often uses swearing to create the humor. Swearing can seem normal.

If you’re learning English with the goal of moving to the US or somewhere else for study or work, your English should reflect that professional nature. You’ll want to limit the amount of swear words you use. Be cautious of content that makes swearing seem commonplace.

Stand-up comedy is an art form with various genres – no matter the genre they often take society’s sensitive topics and highlight how ridiculous or humorous or strange they are to get laughs. The comedian on stage has some allowance to make comments or jokes about these situations. As long as the audience laughs, they can continue to say what they want. When you repeat these same comments to friends, family, or coworkers, it might not get the same laughs, or worse it could get a bad response. You’re not on stage, they aren’t your jokes, leave them to the professionals.

There is another danger in humor when learning a language. The audience may find a joke funny because they know the culture and understand the wordplay (the way the comedian plays with language). If our English isn’t to a fluent level, the reason we find jokes funny may be different from the comedian’s goal. This makes repeating jokes and retelling jokes even more risky for language learners. Things often get lost in translation – that’s especially true with jokes.

To test your English with comedy, do this:

For that reason, a joke can be a great way to see how your English is doing. You have to know what is being talked about (the cultural commentary), you have to be quick enough to follow along with the English used, and those things together will determine if you find it funny.

Humor is meant to be enjoyed together. As you’re learning a language, ask a teacher or a native speaker for comedy recommendations. Explore with them why you think a joke is funny and why they think it’s funny. This will help you gauge how your English is doing and improve!

Both Adult Animation and Stand-Up can be very funny, but…

Native speakers love the humor and the hilarious look at modern life that these programs can offer. However, they can also prove to be problematic for language learners.

In small amounts, they can help improve your English.

The language used can be fast-paced, modern, and simple. The humor can be hidden in the wordplay and pop culture references – things that we’ll need to know in order to master English.

However, there are risks. You could offend others, misunderstand why it’s funny, and reuse expressions that will create problems. If you’re already abroad, in the US or elsewhere, these shows can help you navigate the culture. When planning a move or preparing to live abroad, we recommend that you avoid these types of shows.

Find more to watch and learn with Woodpecker

If you have Netflix and an iPad, get Woodpecker Learning to watch shows in English and touch any word in the subtitles.

If you don’t have Netflix or an iPad, get Woodpecker Learning, watch Youtube and touch any word in the subtitles to look it up.