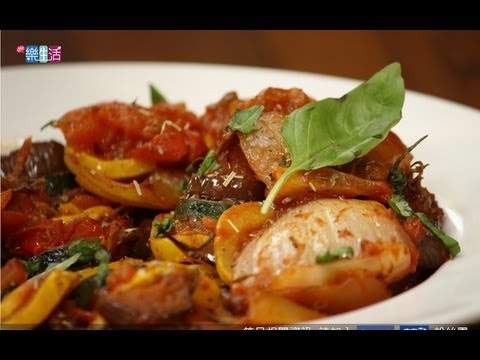 樂生活 or the “Life” channel on YouTube aims to provide viewers with tips and suggestions in making your life better by making crafts or through cooking. Having started in 2012, the YouTube channel has already gotten 150,000 subscribers. The following blog will introduce five of their cooking videos. Whether you like eating or like cooking, the show can help you learn how to use Mandarin to describe what you are doing/cooking. I have yet to learn how to make any of the dishes in these videos, but hope to in the future. All of the food 讓我垂涎欲滴 (chui2 xian2 yu4 di1) or “makes my mouth water.”

In the following videos, the cook, 亮亮, and the host of the show, 禹安 (yu3 an1), have a witty and playful dialogue. Some Taiwanese dislike the cook’s attitude toward the host. However, the two of them have known each other a long time. In my personal opinion, I did not get the same impression as some of the commenters on YouTube. I enjoy listening to the two of them 鬥嘴 (dou4 zui3) or “banter.” 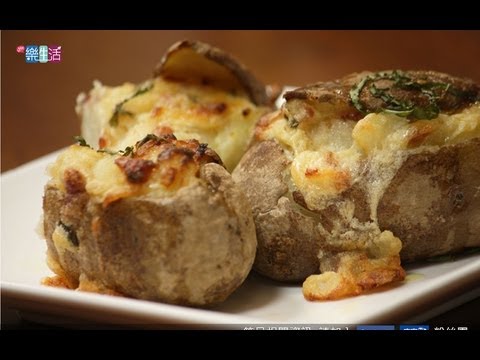 Translation: It itself is a container.

I have always disliked the usual translation of this word as “receptacle.” While the word does indeed have that meaning, I do not imagine many English speakers would say the world “receptacle.” Thus, when you have this word in a vocabulary list, you might find you never use it in any context. After some thinking, I came to a different translation: “container” or “something you can put things inside.” 容 means “to hold or contain” something inside something else. 器 means “device” or “tool” and thus 容器 means “a device/thing that holds something inside of it,” like a box, cup, or container. In our context, 亮亮 scrapes into a baked potato and leaves space to put other stuffings inside.

Translation: The best way is to scrape like I am doing.

Technically, this sentence structure breaks traditional Chinese grammar rules. However, as language is a living entity (語言是活的) and always changes with the times, new grammar patterns often emerge. In this sentence pattern, an action verb sits between 用 and 的, and means the same as if 用 and 的 was not there. For example, in our sentence above, 刮 means “to scrape” (like with a spoon or knife). If we said, 最好是像我這樣刮, the meaning of the sentence does not change. However, the function of 用 + Verb ＋ 的 emphasizes the action you do. Thus, we “scrape” at the potato (to get out the inside stuff) and not “dig” or “cut”, etc.

Translation: You’ll know (that the potato shrinks) after you have baked it, because it will shrink.

Another word whose dictionary definition might confuse you, 消 simply means “to decrease in size” or “shrink” in our context. The opposite of this word is 長 (zhang3). The word 消長 “decrease and increase (in size or number)” or “ebb and rise.” Thus, when the cook puts the potato in the oven, it shrinks (消), it does not get bigger (長).

Translation: The flour on the inside is chewy.

A common word (at least in Taiwan), “Q” or “QQ” means “chewy.” You may see this written on a packet of gummy bears or even some 麻糬 or “mochi.” It might seem strange to say that letters are also Chinese, but it has certainly become more and more common. For example, PPT and APP (both should be read as letters) mean “powerpoint” and “application.” At least for me, before I came to live in a Chinese-speaking country, I never said those two abbreviations. These kinds of strange westernizations have already started to 融入 (rong2 ru4) or “integrate” into Chinese society. 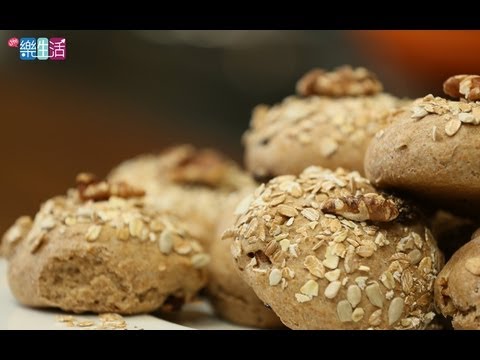 Translation: Nowadays, the concept of health and fitness is mainstream.

當道 literally means “in the middle of the road” and can be used as such. In our context, though, it symbolizes something has become popular and in the mainstream. 當道 usually refers to a concept or a habit. For example, you can say 現在咖啡當道, which means “Coffee is mainstream nowadays.” Thus, you put the thing you want to say is “mainstream” before 當道. Just like in the two sentences, you can also add a time like “nowadays.”

Translation: This dish has made me completely change my point of view.

改 means “to change” and 觀 means “to view/look at.” In our context, 改觀, means “to change one’s point of view” on some subject matter. Important to note is the measure word for a prepared “dish” (菜), which is 道 and not 個.

Translation: The purpose of using sea salt is to bring out the flavor of the flour.

提 when used alone means “to lift something up,” however it’s best to think of it as in 提高, which means “to raise” or “to improve.” 香 means something’s “aroma” or “fragrance.” Thus, together, we literally have “to raise or improve the aroma,” which essentially means “to bring out the flavor.” However, notice the placement of 提味 after 更, which indicates it acts as an adjective. Thus, a more direct (and more grammatically similar to the Mandarin) translation would be: “The purpose of using sea salt is to make the flavor of the flour more flavorful.” Most likely, you will not find 提香 in your dictionary, yet it is commonly used.

More commonly, you might hear “提味“, however the usage differs. 提味 acts as a verb, so you can say 淋(lin2 = sprinkle)一點海鹽提味提味, which means “Sprinkle salt to give more flavor.”

I actually watched this video thinking 普羅旺斯燉菜 should translate as “Stewed Veggies from Provence.” It took my until the end when she started to 擺盤 or “plate” (like in cooking) that I thought of the Disney movie.

Translation: So, with something like this, you can’t first put in the oil.

When talking about cooking, you should try and find the right verbs to describe the actions. For something as simple as “put in,” many Chinese learners might tend to use 放. However, in cooking, most Chinese prefer to use 下. When watching the video, listen for other things she might 下 other than 油.

Translation: But the best parts of all these vegetables will come out.

Any words with 精 implies “the essence” or “best” of something. Another word that often has an unusable translation, 精華 is actually an incredibly useful and 漂亮 word. Instead of trying to remember this word as “best feature,” try to think of it as the “best part or essence” of something.

Translation: Do you mind if I take a bite?

If you have been wondering how to ask permission without using 可以, then this word is for you. When used in a question, you usually say “你介意我 + do something + 嗎” or “我 + do something, + 你介意嗎?”, which both mean “Do you mind if I + do something?” Usually, as Chinese people do not like to be direct, if they do mind, they will not say 介意. Thus, when used in answering, they will most likely say 不介意 or give a roundabout answer to describe why they might 介意. Basically, do not use 介意 because of the impolite tone, but you can and should use 不介意 when answering.

Before we get started, I want to make a quick note. In mainland China, they translate “kiwi” as 獼猴果 because a 獼猴 is a “golden macaque” and the fruit’s peel has the same coloring as the monkey’s fur. 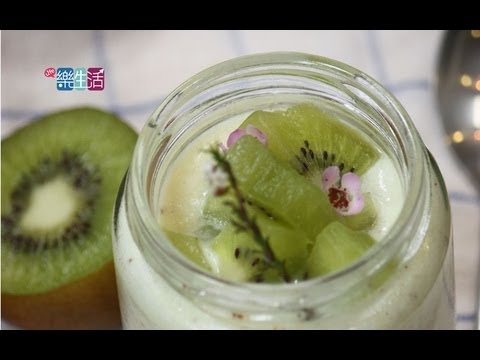 Translation: The sides are emitting some bubbles.

冒 generally translates as “emit.” Other examples with this meaning would be 冒煙 which means “to emit smoke.” 冒火 means “emit sparks/flames” (which has also taken the meaning of “get angry”).

More common in Taiwan, you can use 不賴 the same way you would use 不錯. One of the first sentences I learn using it was: 她長得不賴, which means “She is not bad looking.”

Translation: Okay then, pretend I didn’t (even) ask you to taste it.

The sentence pattern: 當(成) + sb (usually 我) + 沒 + verb (or verb phrase). It translates to: “Pretend +  I + didn’t + verb.” Whereas 當 does not mean “to pretend” but rather “to regard as,”  the word carries this sentiment in Chinese. Literally, the speaker tells the listener to “regard some situation as not having happened.” Another example of 亮亮 making fun of the host, 禹安,  the sentence implies 亮亮 thought having 禹安 taste the kiwi was pointless because all she said was that it tasted like kiwi.

In this video, we see a different cook named “Titan” (interesting name, I know). I put this as the last video because the host and cook speak much faster and use more difficult words. 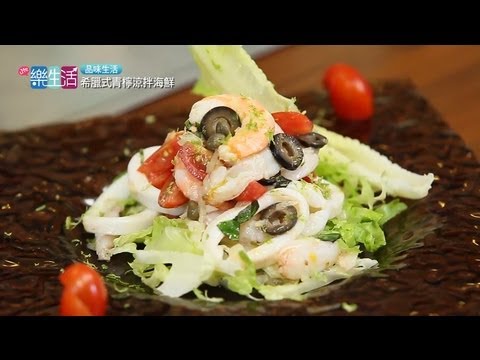 Translation: Today we are cutting (them) into the shape of a circle.

狀 by itself means “shape,” “form,” or sometimes “likeness.” If you translate it back into Mandarin, you could say 狀 = 的樣子. Thus, 圈狀 means 圈的樣子 or “the way in which a circle looks.” Similarly, 絲狀, which comes up later when the chef describes how he wants to cut something, means “in strips.”

Translation: It is important to know the right balance. You can’t cook it (the seafood) too long.

Translation: We mix it up evenly.

勻 by itself means “evenly.” In the 把 structure, we take the 它 and 攪 (“stir”) it. The result of doing so is what comes after the 攪, which is 勻. Thus, we “stir it until it becomes evenly mixed.” Since that is a little wordy, we go with “We mix it up evenly” instead.

Get Your Cook On!

If you like cooking, after you have finished watching and learning the vocabulary in the videos, try making something in the video. If you do, it will cement the material in your mind. Don’t be afraid to interact with your Chinese learning material. If you don’t like cooking, I hope perhaps this post will 讓你改觀！