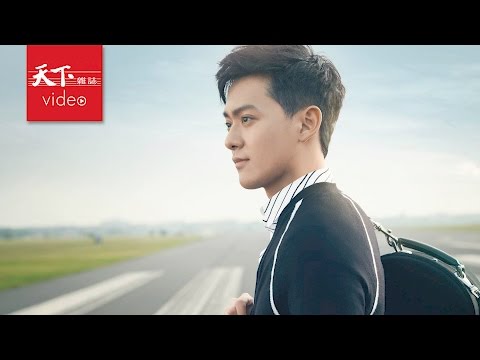 天下雜誌 or “Commonwealth Magazine” was established in 1981 by 殷允芃 (yin1 yun3 peng2). At the time, she worked as a journalist stationed in Taiwan for the Wall Street Journal. In the beginning, the magazine leaned more towards topics related to Taiwan’s economic situation. However, it has expanded to cover topics such as history, education, the daily life of the people, and many others.  殷允芃 established the magazine at a time when many from around the world criticized the negative rhetoric of Taiwanese media. In the midst of it all, many Taiwanese lauded 天下雜誌 as a healthy and positive source of information.

In this blog, we will look at some of the short videos filmed by 天下雜誌. Topics range from a high jump athlete trying to make the Olympics to a famous Taiwanese violinist. Each video features high-quality filmography and a wealth of fascinating information. In helping you learn more about Taiwan’s overall situation, you can also simultaneously learn plenty of new vocabulary in a field that interests you. Below, I will introduce some of the short videos I liked following by a short explanation of important vocabulary. Be sure to click on the picture of the link below the picture to watch the video.

Tseng Yu-Chien: I am not talented. I just really like the violin.

曾宇謙 started playing the violin from a young age. As the title explains, though, he never thought of himself as talented. Regardless, he performed a concerto as part of a group at the 國家音樂廳 or National Concert Hall at the of six. By the time he hit fifteen years of age, he had already become the star in a movie. At twenty-one, he received the silver medal at the Fifteenth International Tchaikovsky Competition. The video by 天下雜誌 combines an interview with previous videos of his performances and footage of him playing for the magazine. Accompanied by music of him playing the violin in the background, the video does a superb job of appealing to both the visual and audial senses.

Translation: To play the violin.

Chinese seems to have infinite words to describe “to play”, especially of different instruments. However, it is important to remember each one describes a motion. 拉 means “to pull”, so Chinese people imagined pulling as the motion of playing the violin. Likewise, 彈 (tan2) means “to pluck or flick with the fingers”, so they use it to say “to play the piano” 彈鋼琴 (tan2 gang1 qin2). EXTRA: Other honorable mentions: 吹 means “to blow”, so it would be used with brass instruments. 打 means “to hit with the hands”, like you would on some drums.

Translation: You have to have your own taste.

Here 曾宇謙 talks about finding his own preferences and style for how he plays the violin. Thus, when describing someone’s preferences or patterns of choice, you should use 品味. For example, when you want to say “my tastes are different than yours”, you can say 「我的品味跟你的不一樣」.

Translation: To figure out your own personal style, it takes the ability to appreciate (other’s work).

曾宇謙 says it took learning with the best and understanding their styles before he could “figure out” what style he wanted to have. 揣摩 can mean “to ponder repeatedly”, but generally translates well to the English “to try and figure out”. 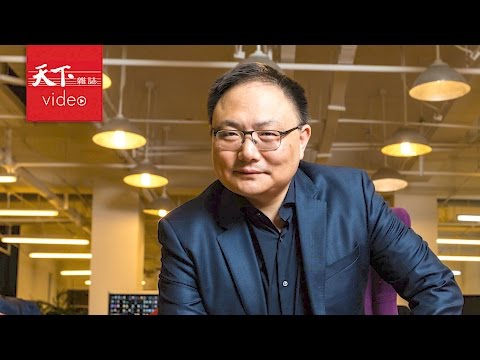 羅震宇, who calls himself 羅胖, has made a large impact on services to promote self-learning. After creating his own television series called 羅輯思維 or “Luogic Talkshow”, he then created an app called 得到. When using 得到, users can pay to listen to audiobooks or buy e-books which he has promoted on his show. The topics on his show cover a broad spectrum of topics, but generally center around history. Known as a remarkably eloquent speaker, his show became one of the most popular talk shows in China. 天下雜誌 did this special on him, trying to delve into the reasons for his success.

Translation: This was the original intent of “Igetget”.

In the video, 羅震宇 states that the 初衷 or “original intent” of his app is to provide a service for his customers. He stresses you must pay first, but afterwards, all services are at the user’s disposal. The app helps people find further information about topics they wish to study. 初 means “first” or “initial” and 衷 means “inner feelings”. Thus, altogether, it makes sense to mean “original intent/purpose”.

Translation: Thank you for supporting (by watching) “Luogic Talkshow.”

When you look up the definition of this word, you may not find a fitting translation. 捧 literally means “to raise hands together”, often in praise, but sometimes to offer something like a cup of tea. 場 translates to “stage” in this context. Thus, usually it means “to cheer on (somebody at a play)”. In our context, it is a courteous way “to thank the viewers for watching.” In all of 羅震宇’s shows, he uses this word as an opener.

New Dawn in Taiwanese Dramas: How did “The Teenage Psychic” go international? 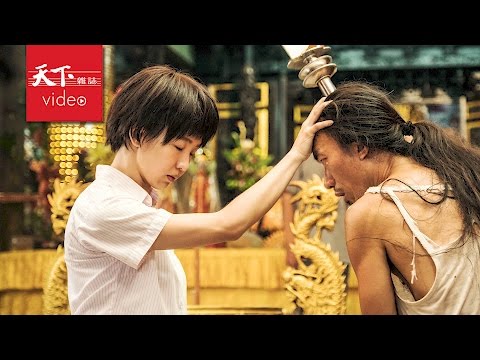 In this special on Taiwanese television series, 天下雜誌 interviews the people behind the production of the show 通靈少女 or “The Teenage Psychic”. First airing on HBO Asia in 2017, the series is about the coming-of-age of a girl named 謝雅真 (xie4 ya3 zhen1). The series marked the first Taiwanese series on HBO Asia to be in only 國語 (Mandarin) and 台語 (Taiwanese). Throughout the video, the director and producer share their experiences in pioneering the international television market in Taiwan.

Translation: She is a girl who once acted as a spiritual medium in a temple.

Ok, I admit, it is not exactly the most useful word. However, you will not find it in most dictionaries and the director says the word multiple times. Thus, I figured I would explain how the word works. 靈 means “spirit” and 媒 means “medium” or “something that acts as a link between two things”. Together, 靈媒 then means “spiritual medium” or, more specifically, “someone who acts as a bridge between the spirit and human world”.

Translation: How does the Taiwanese language interact with the surroundings?

周遭 means 周圍 (zhou1 wei2) and if I am honest, I did not know it before this video. However, as I watched more 天下雜誌 videos, other Taiwanese people used the word. Most importantly, though, it does not seem to differ from 周圍. It is useful to know it for listening, but if you only use 周圍, I imagine it does not matter.

Translation: Everyone still does their best.

糟糕! Classical Chinese again! It might be scary now, but once we learn it, we can overcome our fear of it. 盡 means “to exhaust” as in “exhaust one’s abilities, effort, or energy.” As for 所, in technical terms, it nominalizes a verb. What the heck does that mean? Nominalize means “to make a noun,” so it makes a verb into a noun. Why is this important? Because 盡 acts as our verb here. We cannot have the sentence meaning “everyone still exhausts they themselves can.” That just does not make sense.

When turned into a noun, 所能 means “that which one can do.” (NOTE: the “do” is implied from 能). Now we make more sense. Can we 盡所能 or “exhaust that which one can do”? Grammatically, yes we can. Altogether, then, we literally translate the whole sentence as “everyone still exhausts that which they themselves can do.” If we use some logic, it makes more sense in English as “everyone still does their best.” You can also say “Everyone still does the most that they can do.” In our video, the director talks about how everyone does their best with limited resources.

She Fears Nothing: Owner of online store, Zhou Pin-Jun says, “Break the mold and strive for your own imperfect balance.” 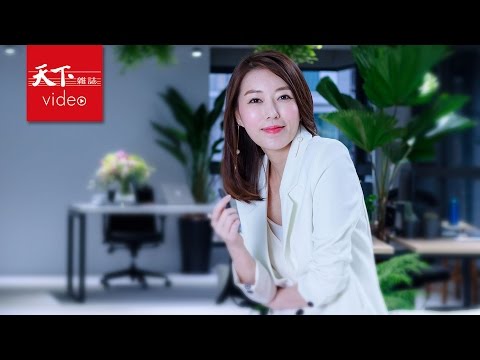 周品均 on how to balance life

Zhou Pin-Jun started a fashion business called 東京著衣 or Tokichoi. However, due to various circumstances in her personal life, the board of directors took her off the board. Through hard work and effort, she started a new brand on her own. Throughout the video, she urges viewers (specifically female viewers) to pursue their passion. She believes not every working woman needs to have a family. In her eyes, every woman should find their own balance between work and family.

Translation: According the men around me, it was a business.

I know I explained this one before, but wanted to remind you to look out for it. You now know it in two contexts!

Translation: Yet you also need to take care of your family at the same time.

I underlined both “take care of” and “at the same time” because 兼 means “at the same time” or “simultaneously” and 顧 means “to take care of (another person or matter)”. Anytime you see 兼, it is usually paired with a verb to mean “doing two or more things at the same time”. In our context, the two things 周品均 “takes care of” (顧) are “work and family”. She says this in the context of what others expect of her. However, she believes this framework does not need to apply to all women. Do what works for you!

The People of the Future Have Arrived: A brand manager of content creators.

What it takes to make someone internet famous

In this video, 天下雜誌 delves into the new work opportunities due to changes in the internet environment. Centered around those involved in finding the next new internet sensation, the video opens our eyes to the future of the internet.

Translation: I think working as a team is far superior to trying to fight alone.

Coincidentally, 遠 translates smoothly to the English concept of “far” when using comparisons. 勝 means “to be better than”, while 過 means “to exceed or pass”. Altogether, they mean “far superior to” or “far exceeds”. EXTRA: This meaning can also be expressed with 遠勝於. 於 is a classical Chinese particle that can be used for comparisons. If you say “A遠勝於B”, you are saying “A is way better than B”. EXTRA EXTRA: You can use 遠超過 to say “far exceed” in the sentence “This far exceeded my imagination” or 這個遠超過我的想像.

Translation: If you say you want to become viral, it is actually pretty easy to do.

爆 means “to explode”, but implies a sudden increase. 紅 means “popular”, like 網紅 means “someone popular on the internet” or an “internet celebrity”. Altogether 爆紅 translates to “become popular suddenly.” In our context, though, since the popularity is attained via the internet, we just say “to become viral” in English. In the video, the head of the company involved in finding internet celebrities talks of the ease of becoming viral and the difficulty of attaining sustained popularity.

After expanding to online videos nine years ago, 天下雜誌 has much to offer both readers and viewers. I had heard of the magazine from a teacher, but after stumbling upon the YouTube channels, I found they 遠超過我的想像. If you learn and study the vocabulary in these videos, I am sure 周遭的人 will all be amazed by your progress. Keep up the good work and email me with any questions or suggestions.