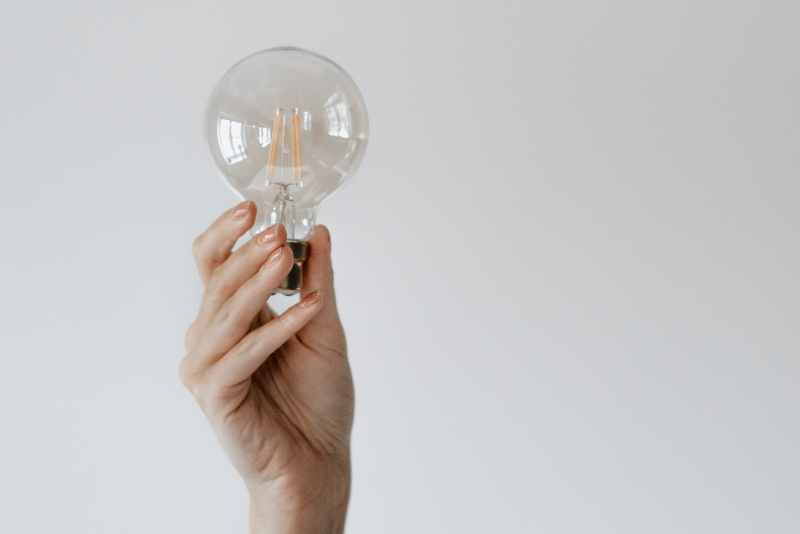 Blow your mind and improve your English

So you’re looking for something a little different from just another sitcom or drama.

It’s time to move onto something that will challenge your English and make you think. Don’t just learn English, learn something else, too. Gain a new perspective and be amazed. What should you watch next?

We’ve got some great options

Actually, Netflix has them. And you can immerse with confidence with Woodpecker for iPad.

These are 5 shows that will get you thinking in English. The content in each show will be more challenging. You’ll say wow. And you’re going to do it all while learning new words and phrases in English.

Watch these shows with the Woodpecker Learning App for iPad to make sure you can keep up. When you don’t know a word in the subtitles, simply touch it to see its meaning.

Here’s what we recommend… 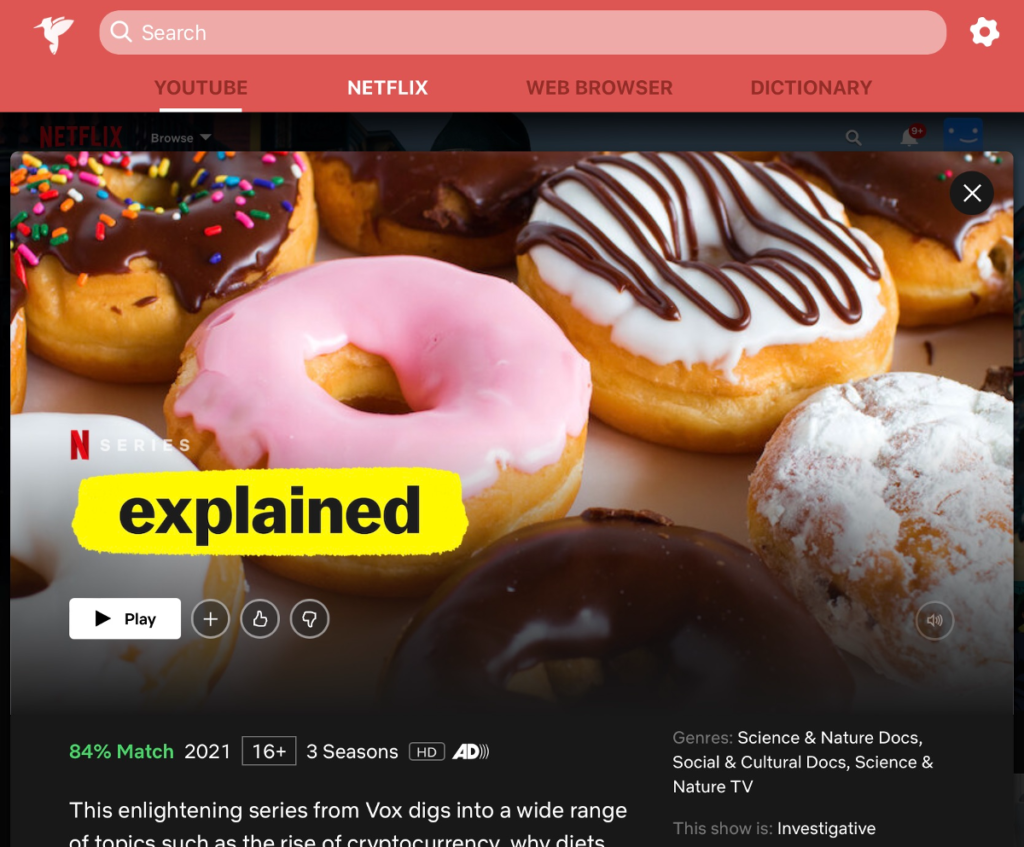 Credit: Explained on Netflix on the Woodpecker app for iPad

Explained – Dive into American culture from an American perspective

This series has 44 episodes in total. Each episode offers a quick look at a part of culture in the US or around the world.

The creators are American and often dive into the topic from their own perspective. This will give you a fresh look at things you may already know something about, like Cricket. Each show is only 20 minutes long. They use narration, that is they have a speaker or “narrator” talk throughout the video. And they use interviews to dive into a specific topic.

Every episode is a video essay. They are told from the perspective of Vox (the media outlet that created the series). Each show is also a great way to start thinking more about various topics.

Topics do vary widely. You’ll see episodes on “Diamonds” and “The Water Crisis” and even “Cults”, “Fairy Tales”, and “Hurricanes”. You’ll learn a little something, get inspired, and improve your English at the same time. As the show explores different topics, you’ll immerse in the vocabulary that goes along with it.

It’s rated 90% by audiences on RottenTomatoes.com and 8/10 on IMDB. Start with the first episode, or scroll through to find a topic that will interest you. 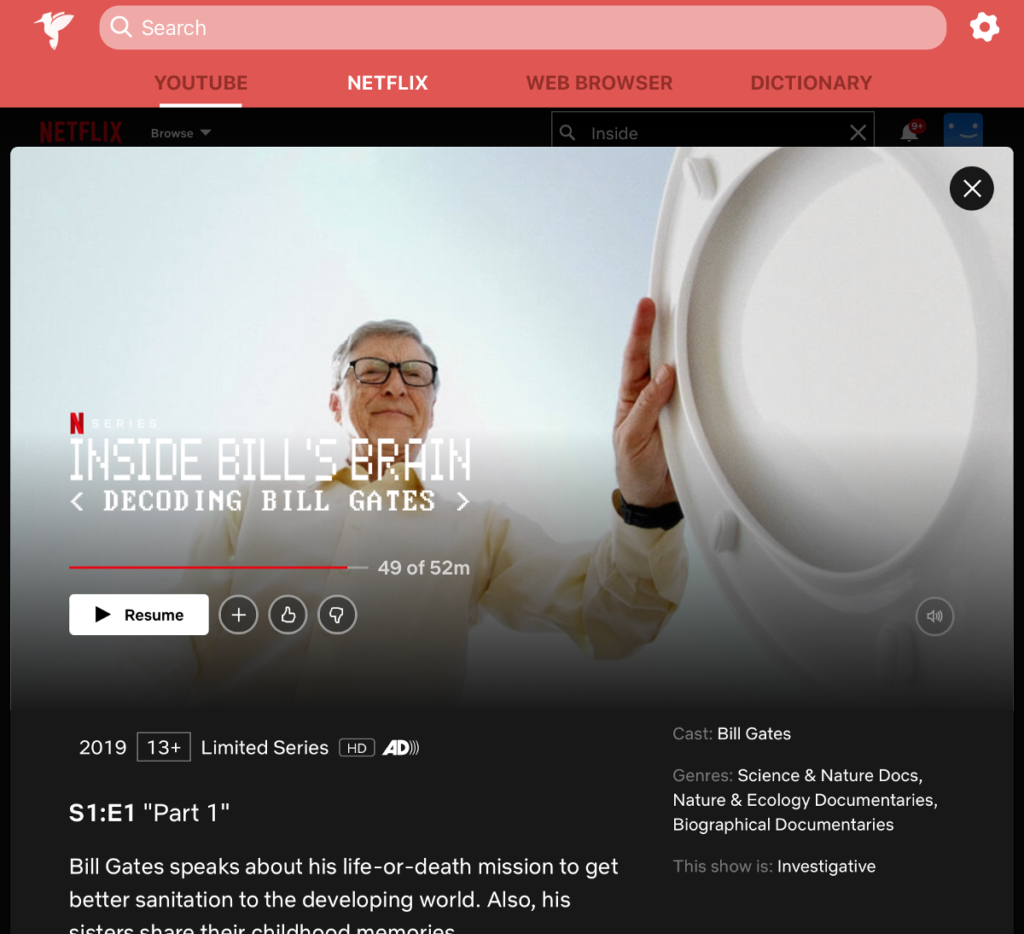 The person who filmed this documentary series is very interested in Bill Gates. He uses interviews and footage he shot while spending time with Bill to tell a story of his life and life’s goals. While the show might not fully decode one of the wealthiest people on the planet, it is interesting. This miniseries with three episodes explores Bill Gates’s history, charitable work, business experience, and future goals.

Bill Gates is extremely well read and very analytical, these aspects come across in his language. His accent and way of speaking are also quite unique. These make using his English to learn very interesting. The episodes, while longer than Explained, will keep you interested. The English is not challenging, and the content will keep you engaged and learning.

RottenTomatoes critics’ score is 43%, however audiences gave it a 90%. IMDb users give it a 7.9/10 score. Try it out and see what you think. 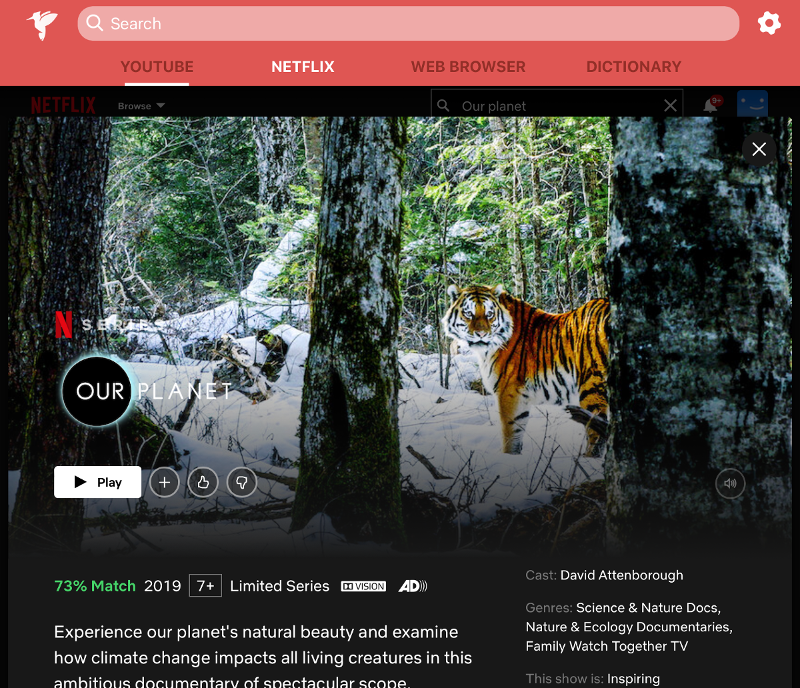 Credit: Our Planet on Netflix on the Woodpecker app for iPad

This series consists of 8 episodes. Each episode focuses on different parts of the Earth. The show explores how humans have impacted the planet (and not in a good way).

This series takes you to explore diverse fauna and flora (animals and plants) around the world, and you’ll learn the vocabulary that goes along with it. You’ll hear the narration of the famous David Attenborough, in his British RP (Received Pronunciation) English. Sir Attenborough is famous for hosting many similar documentaries on the BBC. This series was his first with Netflix.

Our Planet is a great way to explore Nature with beautiful footage of the Earth. You may even get inspired to make changes and will improve your English along the way. You’ll be armed to debate either side of climate change with your English speaking friends. 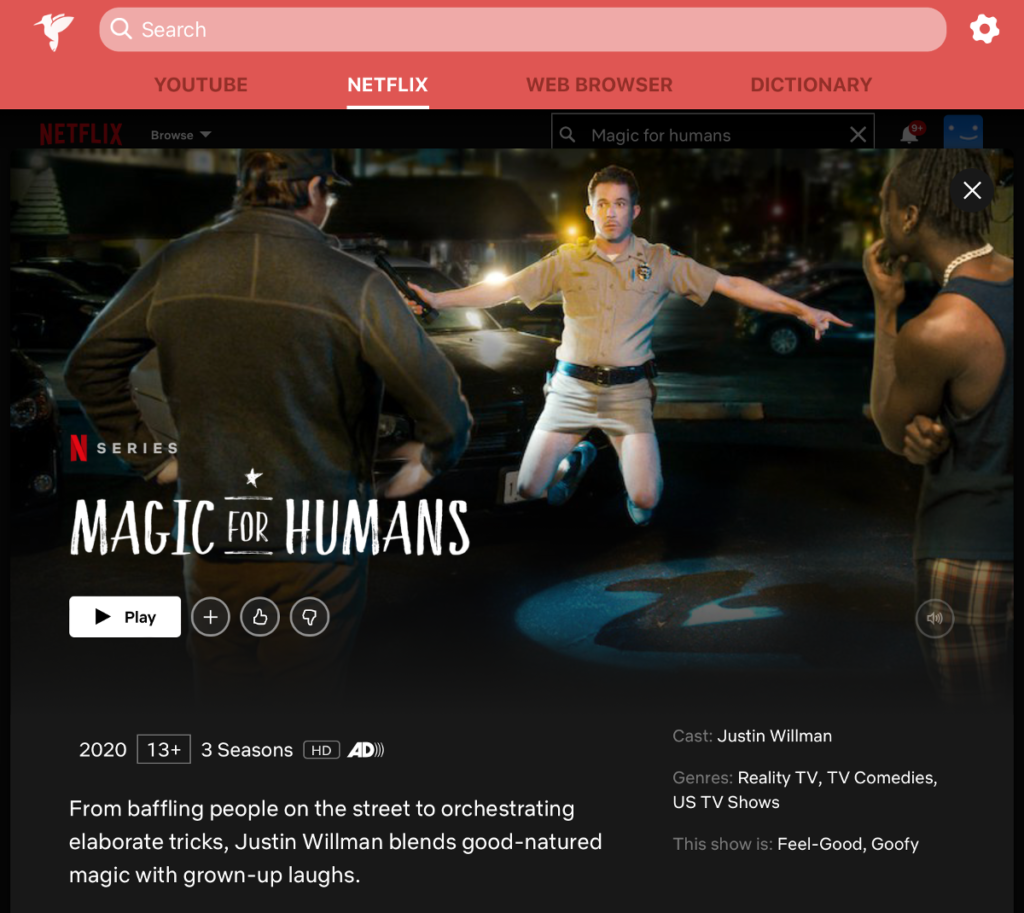 Credit: Magic for Humans on Netflix on the Woodpecker app for iPad

Magic for Humans – Be amazed and improve your English

This series is a bit different from the ones above. We follow the magician Justin Willman as he performs “street magic” (magic tricks performed on the street in front of whoever is available).

He explores cultural norms and American society while performing his tricks. The host often challenges the audience with questions, jokes and wordplay (using puns and similar words in English to make jokes).

It can be fun to watch magic, and his magic tricks are great, as well. So even if you don’t understand much of the English, you may enjoy the physical comedy (jokes you can see without English) and the tricks. The host also shows off the power of suggestion to influence what people say and do and shows us all how vulnerable we all are.

It’s an odd show, unique on this list, and worth a watch if you’re looking for something a little different. 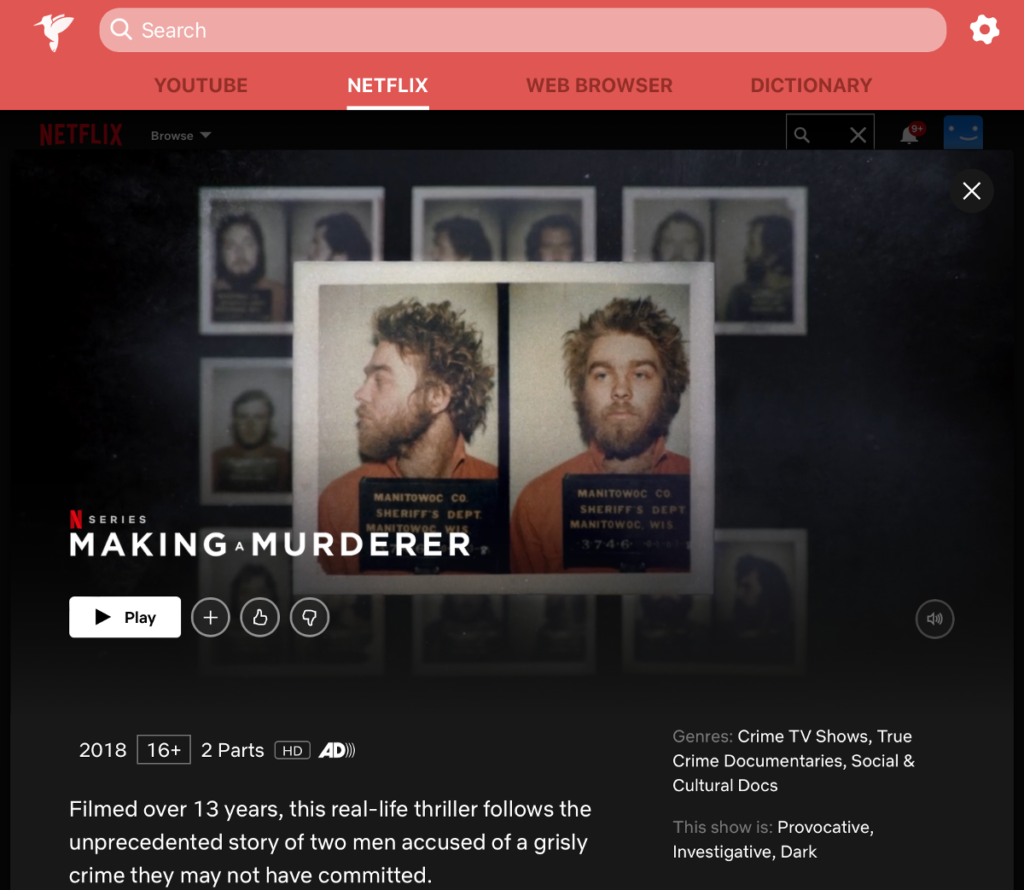 Credit: Making a Murderer on Netflix on the Woodpecker App for iPad

Follow the case presented by the two documentary filmmakers. As they explore the wrongful conviction, you’ll see interviews, hear testimony, and see parts of the trial, as well. The first season has a 98% fresh rating on Rotten Tomatoes, it was incredibly popular when it was released.

This riveting (highly addictive and engaging) documentary will help you explore the US justice system. You will improve your English as you piece together the case for yourself.

Watch these Shows on Netflix with Woodpecker for iPad

Don’t have Netflix? No problem. The Woodpecker App still lets you dive into thousands of videos in English. Touch any word to look it up. Get it today.